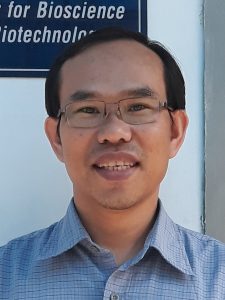 Title of the talk: Development of the system to display recombinant proteins on the surface of vegetative Bacillus subtilis cells and its potential applications in vaccine delivery vectors

Dr. Nguyen Duc Hoang graduated at the University of Science, Vietnam National University Ho Chi Minh City in 1998 and obtained his master degree in 2003. During his master course, he spent one year for ‘International Post-Graduate University Course in Microbiology’ at ICBiotech of Osaka University and Kyoto University (10/2000 – 9/2001) and worked on yeast Saccharomyces cerevisiae. After that, he moved to the University of Bayreuth (9/2003-7/2006), Germany and obtained his Ph.D. at the department of genetics for the work on B. subtilis “Construction of plasmid-based expression and secretion vectors and study of the immobilization of proteins on the surface of B. subtilis cells”. As the consequence, the first commercial expression plasmids, pHT series, for B. subtilis was generated and the project of using controllable stabilizing elements combined with promoters to enhance protein expression level has been developed. In 11/2006 he moved to Max Planck Institute for molecular physiology to work as postdocs in the area of biochemistry/chemical biology and cell biology and started several molecular biological projects in chemistry-based research group relating to cancer studies. He has worked for the University of Science since 6/2011. He is currently the director of Center for Bioscience and Biotechnology and Head of Department of Microbiology.  His research group focuses on gene expression in B. subtilis in the deferent locations, in the cytoplasm, on the surface, and as secretion into the culture medium, and applications of this technology for production of recombinant proteins, vaccine delivery vectors, …